Cost of Living: Faith on the frontline

Posted on June 9, 2022 in category Community by Jenny Hadgraft

As we recover from the difficulties of the COVID-19 pandemic and attempt to address the stark inequalities that the pandemic highlighted, another crisis has emerged – the rise in the cost of living – and it is already impacting upon the most vulnerable people. Energy costs are increasing, and the price of food is soaring, a situation dubbed by some politicians as a “cost of living tsunami”.

A recent survey by Which? revealed that more than one in ten people say they are skipping meals due to rising food prices, while 16% say they are eating fewer cooked meals. Two million households have missed making payments for bills, housing, credit cards, or loans in the past month and one third of people said they have used less hot water due to the increase in energy prices.

Many families on low incomes are already being forced to make tough choices, but as prices continue to rise throughout the year, larger parts of society will be feeling the effects of this crisis as the energy price cap is likely to rise to £2,800 in October. The government responded by promising a £400 grant for energy bills to all households, with additional payments for those on low incomes, pensioners, and those on disability benefits. However, this will not be enough to soften the blow for many.

Food banks around the country have already reported a huge increase in demand. The Independent Food Aid Network says 93% of its food banks have reported an increase or significant increase in the need for their services since the start of 2022.  Meanwhile The Trussell Trust have launched a petition calling on the UK Government to urgently increase benefit payments by at least 7% to keep pace with inflation, alongside longer-term improvements to the benefits system, as food banks ‘cannot pick up the pieces’.

The crisis will likely see a rise in mental health issues associated with financial difficulty, such as anxiety and depression, as people sink further into debt; many mental health charities are concerned that the implications of the crisis are set to be huge.

Key faith dates have already been affected by the crisis. This year, Ramadan proved to be difficult for many families; local shops reported more cautious spending from regular customers for Eid celebrations and Islamic Relief UK reported that many families struggled during Ramadan and will continue to do so. The charity, which usually helps projects overseas, has increased its support to UK foodbanks.

Faith on the frontline

As demonstrated during the COVID-19 pandemic, faith groups are at the frontline in responding to those in need, and many faith-based organisations are actively responding to this surge in demand.

Tower Hamlets Inter Faith Forum, of which FaithAction is secretariat, recently held a community event aimed at empowering faith leaders to be able to support and signpost their communities to local help on offer and to explore how faith and other partners can provide a connected response. Local organisations The Limehouse Project, Debt Free London and The Felix Project provided information on services such as debt, energy, and food advice, while The Zacchaeus Project shared good practice on how to support people holistically.  Council representatives shared updates on how their Tackling Poverty team are responding to the challenges, and faith leaders were updated on current funding available. 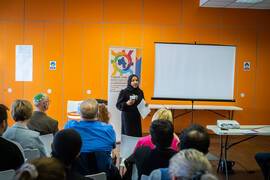 The Limehouse Project is a local organisation that gives advice about welfare benefits and helps people to maximise their income and also advises people on issues such as appealing a rejected benefit claim. They also help families get adequate housing, support people with appeals and have a dedicated Universal Credit advisor. Shirina Ali, Project Manager, explained that the project acts as a bridge between residents and the council. The project has several employees and volunteers that help people write CVs and apply for jobs. The project also looks after people’s wellbeing, running luncheon clubs and fitness activities. However, the team are under a lot of demand and have to manage expectations of how much the service can provide. 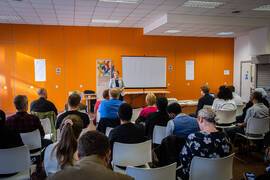 The Zacchaeus Project is a social project of the Methodist Church in Tower Hamlets. The project has been running since 1999, and has two members of staff and 20 volunteers. Many of their membership ask for support with applying for benefits, debt or help with personal budgets, and the team support people with guidance and help. The project often teams up with Quaker Social Action, who advise on how to manage finances. Many of their members need help to access online platforms. Catherine Preece, of the Zacchaeus Project advised other faith groups with an interest to build a holistic service and build real relationships with people in order to be able to unpick their situation to offer full support. 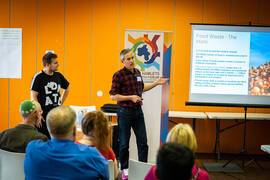 The Felix Project has been running for six years, and focuses on stopping food waste and redistributing it. They take food from everywhere in the food chain, from farm to retail, and distribute to 1000 community organisations over London. Felix’s Kitchen is based in Poplar and is entirely dependent on volunteers, preparing many meals a day. The project also highlights the importance of food education – awareness of nutrition and waste. Like many other groups, the project needs more volunteers – this is essential for creating resilient networks. The team are connecting with other local councils to create a connected system – foodbanks are good, but the system needs to be more sustainable.

We will be helping to co-ordinate a conference in mid-July with Barking and Dagenham Faith Forum, picking up this same theme.

The cost of living crisis will be with us for the foreseeable future – do look out for further events and opportunities to be involved via our regular E-news, and let us know how your faith setting or faith-based organisation is responding by emailing [email protected] 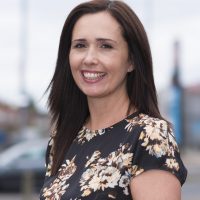 Before having three daughters, Jenny worked for a health insurance company. Full time mum until 2013, she went back to college and completed a degree in English Language and Communication. Afterwards, she began volunteering with the National Autistic Society, which lead to a temporary position within the Care and Support Alliance as a policy and campaigns assistant. Finally, she joined the administration team here at FaithAction as she wanted to be involved in an organisation that is focused on providing solutions for local people. Jenny provides the secretariat for one of FaithAction’s projects THIFF, the Tower Hamlets Inter Faith Forum. Jenny also supports our work with the Department of Health. In her spare time, Jenny loves spending time with family, reading and exercising.

View all posts by Jenny Hadgraft →