In Tuesday’s statement to the House of Commons, Boris Johnson stated that the coronavirus has no interest in our debates about which activities are safe and which are not. Instead, “its only ambition is to exploit any opportunities to recapture ground that we might carelessly vacate, and to reinfect our communities”. The evidence suggests that this virus does not exploit our communities equally, however. We left ground exposed before the arrival of COVID-19, and the distribution of communities living on that exposed ground was not even. As a result, this coronavirus has exposed, rather than caused, wide inequalities in our society.

The first pre-existing inequality I’d like to highlight (of which there are many!) is socioeconomic deprivation, which is a measure derived from factors such as income, employment, health, education, crime, the living environment and access to housing within an area. Statistics released by the Office for National Statistics (ONS) on 12th of June demonstrated that, between March and May, the mortality rate from COVID-19 in the most deprived areas of England was more than double the mortality rate in the least deprived. Similar disparities were recorded in Wales. Sarah Caul, Head of Mortality Analysis, at ONS explained that ‘general mortality rates are normally higher in more deprived areas, but COVID-19 appears to be increasing this effect.’ 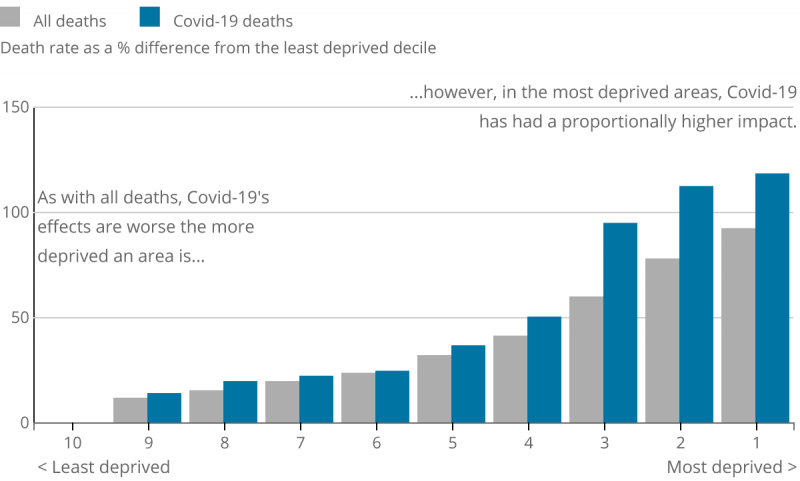 There is some overlap between deprivation and how densely populated an area is. Urban areas were hit significantly harder than small towns and villages, and London exceptionally so. Middlesbrough – one of the most deprived local authorities in England – had the highest rate outside of London.

Another inequality overlapping with deprivation is health inequality. Research by Public Health England has shown that a ‘life expectancy gap’ exists between the most and least deprived areas of the country, with heart disease, lung cancer, and chronic lower respiratory diseases, some of the primary causes of the gap. Many of these condition heighten the risk of COVID-19. As Prof Stephen Powis stated at a Downing Street briefing, “It is absolutely crucial that we narrow the gap in health inequalities.”

COVID-19 has also exposed pre-existing inequalities regarding social capital, which played a significant role in an area’s ability to respond to the virus. A recent report from the APPG on Social Integration looked at the rise of ‘mutual aid’ groups in response to the virus, where groups of people voluntarily came together and agreed to support one another as well as vulnerable members of their communities. They located 25 local authority areas which have low levels of mutual aid, and found that they were mostly in large cities or towns which shared the following characteristics: fewer community spaces for social mixing, lower levels of neighbourhood trust, higher levels of social isolation, marked income or ethnic divides, and lower levels of civic participation. In short, they were areas with low social capital.

A final inequality recently revealed by COVID-19, of particular interest to us at FaithAction, was the level of risk faced by different religious groups. As seen in the chart below, there are huge discrepancies in the age-standardised mortality rate by religious grouping, with Muslims, Hindus, Sikhs and Jews much more at risk than Christians or those with no religion. 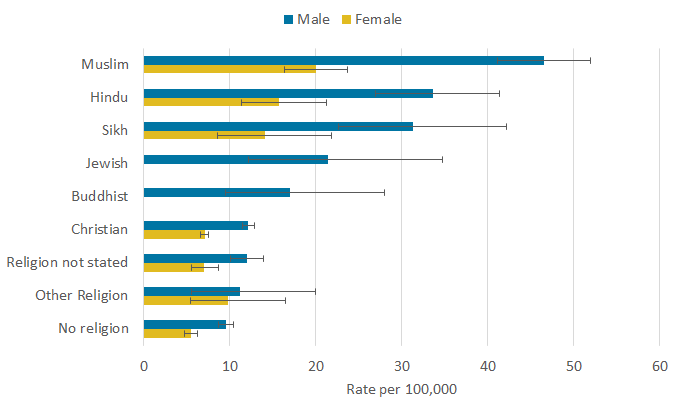 Even when accounting for socio-demographic factors, these differences remain prevalent, with Muslims around twice as at risk as Christians.

For some religious groups, ethnicity is correlated, however, and ONS found that once you control for ethnic differences, there is very little difference in risk levels by religion, other than in the Jewish community which remains much more at risk, and those of no religion, who remain significantly less at risk. 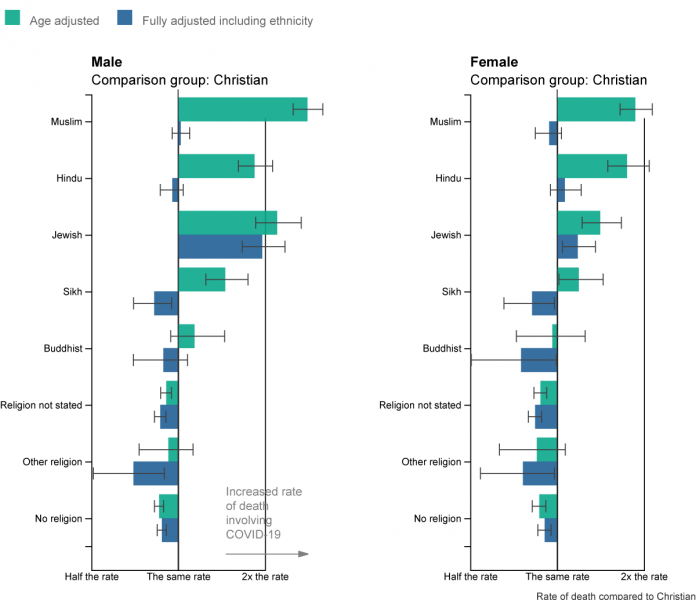 Much of this difference might be explained by circling back to socio-economic deprivation, but the research doesn’t yet explain the difference fully. For a more complete analysis, see the PHE report on COVID-19’s impact on BAME communities.

These statistics reveal more questions than answers, but what is clear is that COVID-19 didn’t create these inequalities—it simply exposed and exploited them. The good news is that, now that they have been brought to the fore of our national conversation, they can no longer be ignored.

As it becomes safer to return to life as normal and restrictions are lifted, we re-emerge into a less than equal world—one perhaps even less equal than the one many of us retreated from in March— and we have a societal duty to look out for and empower those who are on the losing end of those inequalities. Which communities have we carelessly left exposed? Which individuals have been unnecessarily vulnerable? How do we make sure not to give any ground to future risks and dangers that may confront our society? There is research to be done, but also a great deal of action to be taken and needs to be met. At FaithAction, we trust that Faith-based and community organisations will be at the forefront of these efforts.

Matt plays an important role in FaithAction’s efforts to advocate for faith communities and the value they add to society. He was central in coordinating our COVID-Response project and continues to gather and collate concerns and ideas from faith communities up and down the country. He also oversees FaithAction’s work as Secretariat to the APPG on Faith and Society and works to support the propagation and health of Faith Covenants nationwide.

View all posts by Matt Allen →

2:12 pm, 06th Dec 2022
Creative English
@CreativeEnglish
This week's Online Cafe Connect session for people in the West Midlands is all about dealing with local authorities… twitter.com/i/web/status/1…
Retweeted by FaithAction
0
1

10:12 pm, 02nd Dec 2022
Kathy Coe, MBE
@kathycoe3000
A wonderful organisation called FaithAction do a lot of inter-faith work which is about our churches and places of… twitter.com/i/web/status/1…
Retweeted by FaithAction
1
0

8:12 pm, 05th Dec 2022
Abbas
@Abbasmirza70
An official goodbye to @FatherAlan from friends,faith organisations and partners for over 20 years of community act… twitter.com/i/web/status/1…
Retweeted by FaithAction
6
20