The uncanny joy of meeting

Over the past two years, we’ve learned that we can do so much remotely, particularly when it comes to what we thought of as office-based work. We can have meetings, we can hold workshops, and we can hire and fire people. I even know some people who have worked at an organisation for a considerable period and then moved on, never having met a single one of their co-workers in the flesh. 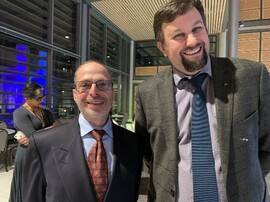 Meeting Rabbi Jeff Berger in person after many a Zoom call.

This online flexibility seems to offer us so much. In terms of accessibility, we have learned to think differently and often there are no excuses for a lack of accessibility, assuming there are no technical restrictions. One disabled worshipper, whose church had taken services online, remarked, “Why has it taken you so long?”

It is important to recognise what technology and the relative affluence we have in the UK has enabled us to do. With just a little effort, we have been able to remain connected somehow despite restrictions. I am, of course, in no way disregarding the very real mental and social anguish that not being able to connect with people can cause, but I just want to examine more closely this different way of forming relationships.

I don’t know how you feel about networking and meeting people for the first time, but it is often quite an uncomfortable experience. Sometimes, when new colleagues join me at events, they remark how comfortable I seem to be at networking. The problem is, what they are seeing is not ‘networking’—I am not starting conversations for the first time, not breaking new ground. I am simply greeting people I know, picking up on interesting points, and sharing them with my colleagues to bring them into the conversation. It’s not so much ‘networking’ as passing the baton of familiarity between a group of people. In some ways, it’s the physical equivalent of what LinkedIn does.

I think this goes some way to explain the uncanny enjoyment I feel when meeting people, whom I have only met online, in person for the first time. Because we have had such a prolonged period of limited physical contact, we have developed a unique kind of relationship with people who we have not met in person. The FaithAction Coffee House has provided such an opportunity just to cherish a virtual coffee with others from the comfort of our own homes.

If I were the only one to be getting this buzz out of meeting in person for the first time, I would put that down to, what Malcom Gladwell calls, the ‘connector’ in me. However, it’s quite clear that the people I’m meeting too feels that same buzz, even if the initial conversation has only been how we didn’t expect someone to be quite so tall in person.

So, what can we learn from this? It’s all a bit intangible still, but I think that it is so important that we are able to meet each other in person once again. The simple act of crossing a room to shake someone’s hand—or offer an elbow—is a deliberate one, one that takes more energy, more consideration than simply clicking that ‘join meeting’ button. I believe that instinctively we value those things that cost us more, even if the cost isn’t something tangible. Relationships, if they are to have any depth at all, must be based not on convenience but on investment.

When restrictions were lifted back in September 2020, and we were allowed to meet people outside of our household in restaurants, I got a call from my friend who wanted us to meet for dinner in London. At the time, like many others, I was distinctly aware of the cleanliness—or lack thereof—of London’s Tube network. The thought of travelling to central London, for what would no doubt be a very nice meal in great company, did not fill me with joy, particularly as the vaccination programme hadn’t even started yet. I started to um and ah, but then they said, “Quite frankly, Daniel, I’m lonely!” Let me tell you, I was seated at a table in that restaurant within two hours. My relationship with them, and the value they hold to me, dictated my response regardless of convenience to myself—and it was one of the best meals I’ve ever had, to boot!

I’m not saying we should be out there taking unnecessary risks—but there’s a lot to be said for the value of a ‘costly’ relationship over just a convenient acquaintance.

Daniel Singleton has been the National Executive Director of FaithAction since 2007. In this role Daniel has become influential in a number of government departments, highlighting the significant part that faith-based organisations are playing in communities around the UK. Daniel also meets regularly with FaithAction member organisations to help them move forward and develop in their delivery.