A connected society: the Government’s new strategy to tackle loneliness

Monday, the 16th of October; the day the Government announced A connected society – A strategy for tackling loneliness. A day that we hope will help to change the health and well-being of millions of adults and young people living in the UK.

Prime Minister Theresa May states that:

Loneliness is one of the greatest public health challenges of our time… that is why in January I commissioned this strategy and appointed Tracey Crouch as the first ever government Ministerial lead on loneliness.

The strategy highlights the important research that the Jo Cox Commission have done over recent years into the scale and scope of loneliness that the UK has been facing. It reinforces Jo’s statement, that “loneliness does not discriminate”. It can affect teens and young adults, carers, refugees, the recently bereaved and older people.

This new strategy is a giant first step, distinctly stating a call for action for a national conversation on loneliness and setting out a positive and coherent vision of how the government can help people and communities to build stronger relationships.

In June of this year, the Prime Minister announced £20million of funding into supporting voluntary, community and charitable organisations to tackle loneliness; an extra £1.8 million is promised in addition to that to expand community projects such as community cafés and gardens. 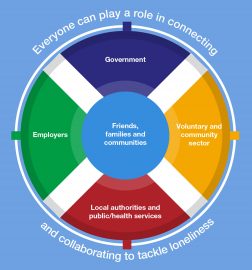 Everyone can play a role in connecting and collaborating to tackle loneliness, report pg 15

Chapter one of the strategy is an executive summary of existing evidence around loneliness including its causes and impacts. Chapters two, three and four each set out new and existing government commitments and partnerships in three specific areas. Chapter two exhibits how the government will work with local authorities, health bodies and the business and voluntary sectors to introduce new initiatives within the everyday services we use. Chapter three states how community infrastructure has a key role to play in supporting people to come together in rural and urban areas and in accessing community space, inclusive transport and well designed housing. Chapter four speaks of working with others to help spark this new national conversation and chapter five sets out how government will continue to collectively take this forward. You can read the report in full on GOV.UK.

Research has shown that over nine million people in the UK are suffering from feelings of loneliness which have proven to be as damaging to your health as smoking 15 cigarettes a day. We at FaithAction are keen to see what this new strategy will bring to the table, in terms of research and outcomes in the country’s mission to stop loneliness.

Please get in touch to give us your reactions, questions and comments on the report by emailing me at [email protected].

8:01 pm, 26th Jan 2023
Barnardo’s
@barnardos
📈 The #CostofLiving crisis is making life difficult for families all over the UK. 🗺️ Wherever you are, find out h… twitter.com/i/web/status/1…
Retweeted by FaithAction
3
2

9:01 am, 27th Jan 2023
LDEngland
@LearningDisEng
Read the #ReimaginingCare report, calling us all to rethink attitudes to care and support: buff.ly/3HrGisZ… twitter.com/i/web/status/1…
Retweeted by FaithAction
1
0

10:01 am, 27th Jan 2023
Carers UK
@CarersUK
Caring can sometimes put a strain on your relationships. On 1 Feb we’re running a relationships workshop with Dee… twitter.com/i/web/status/1…
Retweeted by FaithAction
7
8

9:01 am, 27th Jan 2023
FaithAction
@FaithActionNet
Today marks #HolocaustMemorialDay 🕯️ 2023. This year's theme is 'Ordinary People', prompting us to consider how we… twitter.com/i/web/status/1…
1
2